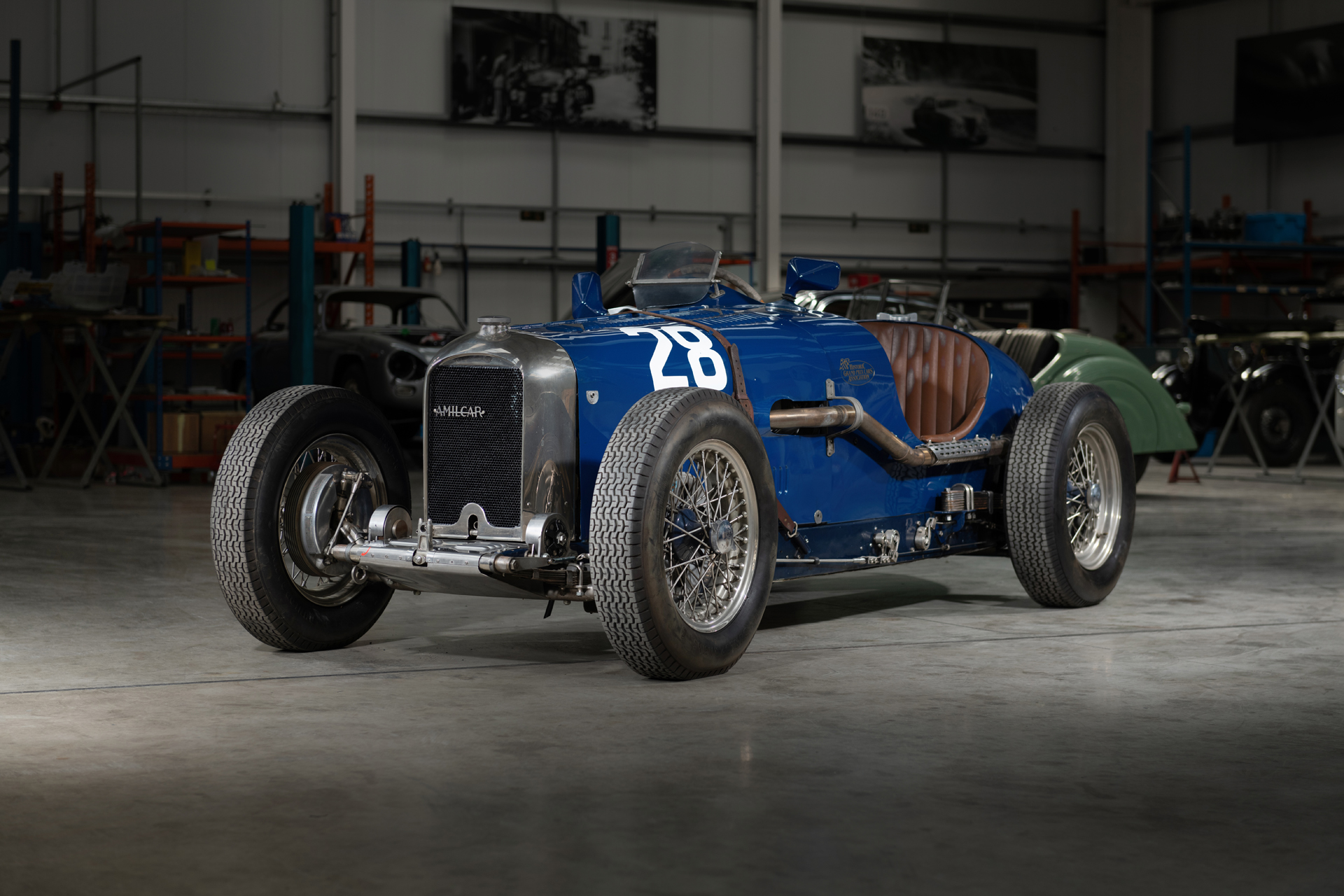 The name ‘Amilcar’ is thought to be an anagram of the founding partners’ names, Joseph Lamy and Emile Akar, who started the company in July 1921 at 34 rue du Chemin Vert in the 11th arrondissement of Paris. By mid 1924 they had relocated to larger premises in Saint-Denis on the northern edge of the city. The company’s two engineers were Edmond Moyet and André Morel, both ex-Le Zèbre. Moyet was chief engineer; Morel’s main interest was competition, and he became their first works’ race driver.

The first Amilcar was a small cyclecar designed by Jules Salomon (who also came from Le Zèbre and later joined Citroen) and Edmond Moyet. It bore a striking resemblance to the pre-war Le Zèbre and was first exhibited at the Paris Motor Show in October 1921.

The business benefited greatly from the cyclecar boom, prompted by a government initiative reducing annual car tax (fixed at 100 francs per year) for powered vehicles weighing no more than 350 kg dry weight, providing seating for no more than two people and powered by an engine of not more than 1100cc. If a vehicle exceeded these limits it ceased to be a cyclecar and was officially designated a ‘voiturette’.

It was these models, with their pointed tails and sporty appearance in which enthusiasts could compete at reasonable cost, which gave the Amilcar marque its sporting reputation.

EVOLUTION OF THE C6

In the early 1920s, Andre Lombard at Salmson had designed an 1100 cc. four-cylinder engine of outstanding specification, having twin overhead camshafts and a semi-desmodromic system of operating the valves. Wonderfully conceived from the beginning, these engines were developed and made increasingly competitive over time with the addition of dual-ignition and supercharging. By contrast, these Salmson chassis were dull and generally inadequate, initIally relying on wood to strengthen and buttress the longirons. Furthermore, unlike the Amilcars, they had spindly and ugly coachwork.

Concerned about the dominance of Salmson in 1100 cc races of the time, in 1924 Moyet and Morel began to devise something quite new, not merely an improvement of their successful four-cylinder side-valve cars. Those engines had delivered excellent performance, but ultimately had the limitations of a four-cylinder side valve construction – a design not intended for racing. Morel, in his own right a racing driver of considerable note, was a strong proponent of competition to bring honour to the Amilcar marque.

The result of their endeavours was astounding: an engine built with watch-like precision – nearly 1100 cc, 6-cylinders, twin overhead camshafts, an immensely strong crankshaft running in seven main bearings, and a twin-lobed supercharger. The chassis and four-speed gearbox were designed especially for this power-unit, as was low, sleek, minimal racing coachwork. The engines in the first cars produced late in 1925 had a block with fixed head, in which both the main and crankshaft bearings were ball or roller. This new Amilcar created a sensation in the motoring press, and the angry howl of its exhaust-note was unlike anything heard before on the track.

Once teething problems were resolved, these sophisticated racing cars – designated the Type C0 – swept everything in their class before them. The small number produced were for factory use, as were variants which had the engine placed offset to the left in the chassis to allow a lower seating position; and two examples of an even lighter single-seater car called the MC0, intended specifically for record-breaking. And break records they did, in swathes. Petulant detractors – mainly in the Salmson camp – held that the engine was nothing more than one bank of the sublime 2 litre V-12 Delage, but it appears that the 2 litre Sunbeam may also have had significant influence on Moyet’s design. The argument is academic, because the car was magnificently-conceived, integrated unity from nose to tail.

Subsequently Amilcar built between 50 and 60 sets of numbered components for homologation purposes, which were offered for sale to the general public, and intended for racing. These C6 cars had the engine, steering box and back axle number stamped (not the chassis). However, not all numbers seem to have been built up, and it is probable that many components were sold as spares for built up cars.

THE CAR FOR SALE

Chassis number 11032 was a complete car when discovered by a Swiss journalist, Mr Heinz-Ulrich Wiesselmann, in East Berlin. Together with a spare chassis, 11023, the Amilcar was eventually smuggled out bit by bit into Switzerland. Both were purchased by a Mr Morris Frost of Florida, USA, who restored 11032 and sold the spare chassis 11023 to Desmond Peacock in the UK. 11023 was later rebuilt as a complete car and featured in The Automobile (January 1997 edition).

Maurice Frost ran 11032 for some time as a road car having fitted an accumulator box and starter motor. After some years the engine block cracked and a repair proved impossible, so Frost sold the Amilcar to a small motor museum. 11032 was later purchased from the museum by the legendary British motor dealer, Dan Margulies, who sold it on to a German client called Zinkle. Mr Zinkle delivered the car to Tomkins Engineering in Essex for rebuilding, and a subsequent deal involved Tomkins taking the Amilcar into stock.

Bob Graves purchased the partially rebuilt car from Tomkins in 1982 as a complete car with matching part numbers except for the rear axle. Note that the chassis were never stamped. A serial number comprising the engine number with the first two digits of ‘90’ substituted by ’11’ would then be allocated to each completed car.

As a talented engineer, dedicated and knowledgeable Amilcar  enthusiast, and committed vintage racer, Bob extensively re-engineered and improved both of the C6 cars he owned, primarily for racing purposes. Over the years Bob built up 3 C6 engines from his own castings (probably stronger than the originals), all beautifully constructed, and faithfully following the original Amilcar drawings of which he had a complete set. Correspondence in the car’s file illustrates Bob’s deep engineering knowledge and understanding of many of the period limitations in the engineering of these cars.

The car is offered for sale in race trim on behalf of the Graves family, incorporating various modifications including 16 inch wheels and an engine running on methanol.

Thornley Kelham has extensive experience and knowledge of these cars, having fully restored two examples to original, authentic concours standards. We would be happy to advise on any modifications to make this rare C6 example road legal. Otherwise – go racing!