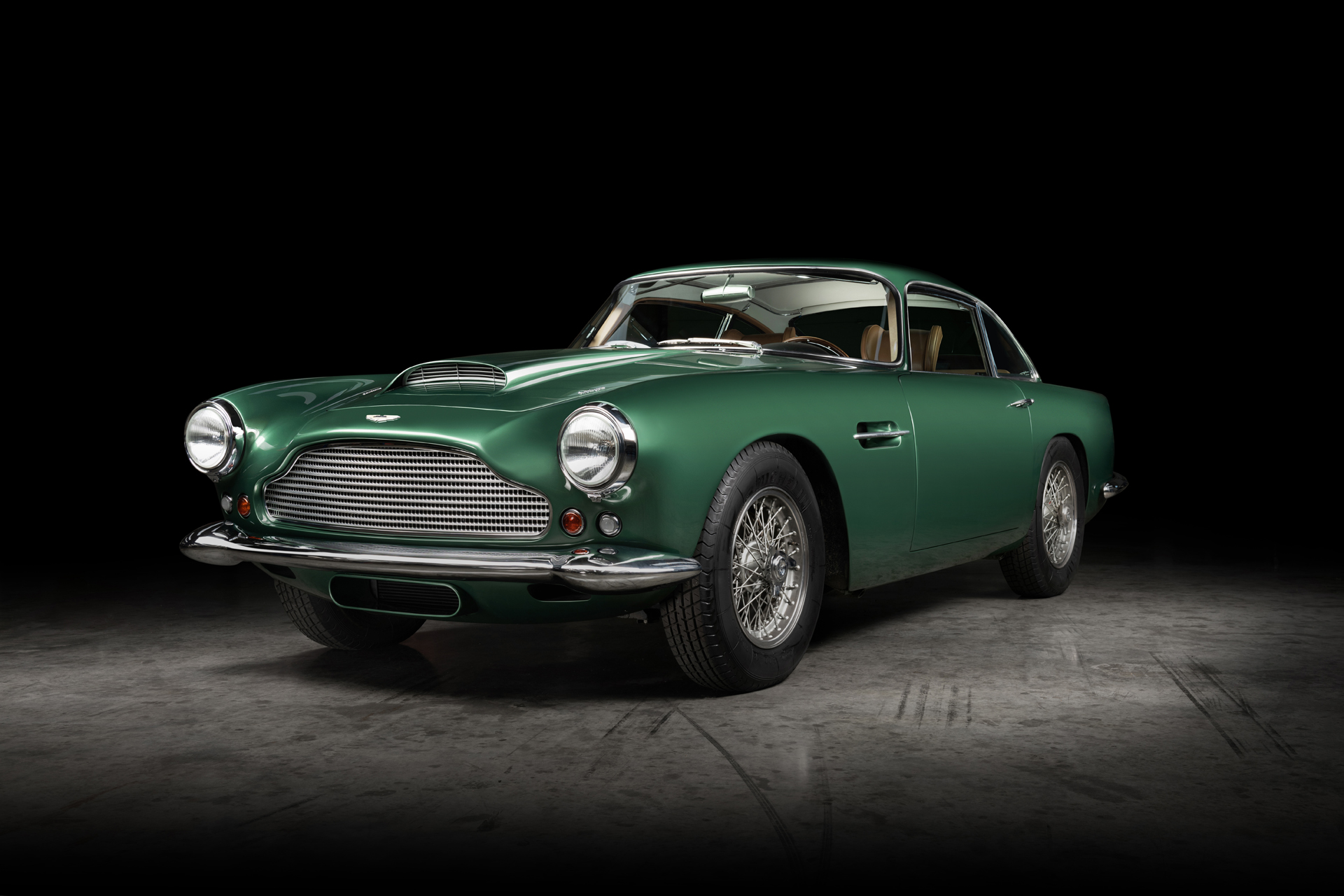 At its launch in October 1958, the DB4 marked a major turning point for Aston Martin. It was the first car of the David Brown era which neither used a chassis derived from the experimental Atom of 1939, nor an engine designed by W. O. Bentley. Moreover, it was the first Aston Martin to carry Carrozzeria Touring’s “Superleggera” bodywork, in which light alloy panels were fixed to a framework of light-gauge steel tubes welded to a platform chassis. Although styled by Touring, the DB4’s gorgeous fastback coachwork was built under license at Newport Pagnell by Aston Martin, which employed some of the finest panel beaters in the industry. The result was a car whose sleek lines were described as “unmistakably Italian and yet… equally unmistakably Aston Martin.” When the DB4 was introduced, it was Britain’s most powerful and fastest production car. Its aerodynamically styled, all-aluminum, Superleggera coachwork looked sensational, establishing a style that would endure for the next dozen years.

The Aston Martin DB4 was the first of the DB models to employ the entirely new twin-overhead-camshaft, six-cylinder, 3.7-liter engine designed by Tadek Marek, which had first been seen at Le Mans the previous year in the DBR2. A Polish engineer who had joined the company in 1954, Marek had previously enjoyed a racing career and posts with General Motors and FIAT in Poland—the designer of tanks during WWII—and had arrived at Newport Pagnell from Austin.

Manufactured between October 1958 and June 1963, the DB4 developed through no fewer than five series. However, it should be made clear that the cars were not thus designated by the factory; this nomenclature having been suggested subsequently by the Aston Martin Owners Club to aid identification as the model evolved. The first series had already undergone a number of improvements, including the fitting of heavy-duty bumpers after the first fifty cars. The major changes on Series II (1960) included a front-hinged bonnet, bigger brake calipers, and an enlarged sump. In addition to Vantage and convertible models, approximately 1,100 of these iconic “Gentleman’s Express” sports saloons were produced between 1958 and 1963.

This early DB4 carries the styling cues of the second series of the model, with its large hood scoop (similar to those on the DB4GT) and “cathedral” rear lights.” Only 351 of these were built, the majority being to home market, right hand drive specifications and approximately to export, left hand drive configuration.

The car recently emerged from long-term storage, in which it spent more than fifteen years, and has the attractive wholesome feel of a “barn find” albeit being in remarkably good and solid state. Over the course of its career, the Aston received a repaint in the gold, giving the car a look reminiscent of the Corgi Bond DB5 toys (many of which were painted gold).

As new, the DB4 was supplied through US agents Inskip to Sidney Langsam in Denver, Colorado, in the period colorway of Pale Primrose, with a black leather interior. Options added were chrome wire wheels, rear view mirrors and 3.77 rear axle ratio. Langsam was responsible for developing the popular Colorado racing venue: Continental Divide Raceways, located high in the mountain plains above Denver. He made his money in commercial finance, but always had an interest in cars and, by the late 1950s, is known to have raced a Jaguar. Continental Divide Raceways grew out of a venture which started as simply a home for “anything racing.” This encompassed drag race meets as well as circuit racing, but quickly grew with Langsam bringing his capital to develop it. By the end of the 1960s, it was included on the Sports Car Club of America roster. The most famous race housed would be the Rocky Mountain 150, which debuted in 1968, and was won by A.J. Foyt. To this day, the SCCA presents the Sid Langsam award for the Outstanding Contribution to racing in Colorado.

It would seem that Langsam chose to upgrade his Jaguar for an Aston in 1961, receiving this new car on April 24th that year. He must have been impressed by the Aston, as he would add a new DB5 (chassis 1740/L) to his stable three years later, which he collected directly from the factory. Langsam died in 1973, rumored to be partially due to his struggle to recover from a nasty accident that had happened at Continental in 1969, after which his interest in racing waned considerably. The Raceways would also diminish over time and have been closed for many years. Langsam’s Aston is thought to have remained with him for much of his life, and to have remained in Colorado through the 1970s. In the early 1980s, the Aston moved East, closer to its original supplying agent, and was seen driving around New York City on more than one occasion. Soon after, it would be laid up and stored until 2018.

By August 2018, the car had survived its 57 years remarkably well, the underside showing to be good and straight, while the door shut lines, trunk, and hood also fit well. Minimal repair was noted to some of the extremities of the car, no doubt owing to its New York City years!

At some point, the interior seats were recovered, but the interior showed evidence of the original trim, with some of the door panels and rear seat area still carrying the black leather it was delivered with. Perhaps the best indication of its condition is that with only modest work of a carburetor tune up and new battery, the car came back to life.

Aston DB4s make great tour cars, ideal for events such as the Copperstate 1000, New England 1000, etc. and could be a great basis of a desirable model for refurbishment. Either way, this fresh Aston “find” deserved close attention.

In late 2018, this rare car was purchased by the present owner and has now completed a full nut and bolt restoration at Thornley Kelham, during which the engine capacity was increased to 4.7 litres, triple Webers fitted, air conditioning and head rests added to the Vaumol -clad interior, and Borrani wire wheels fitted.