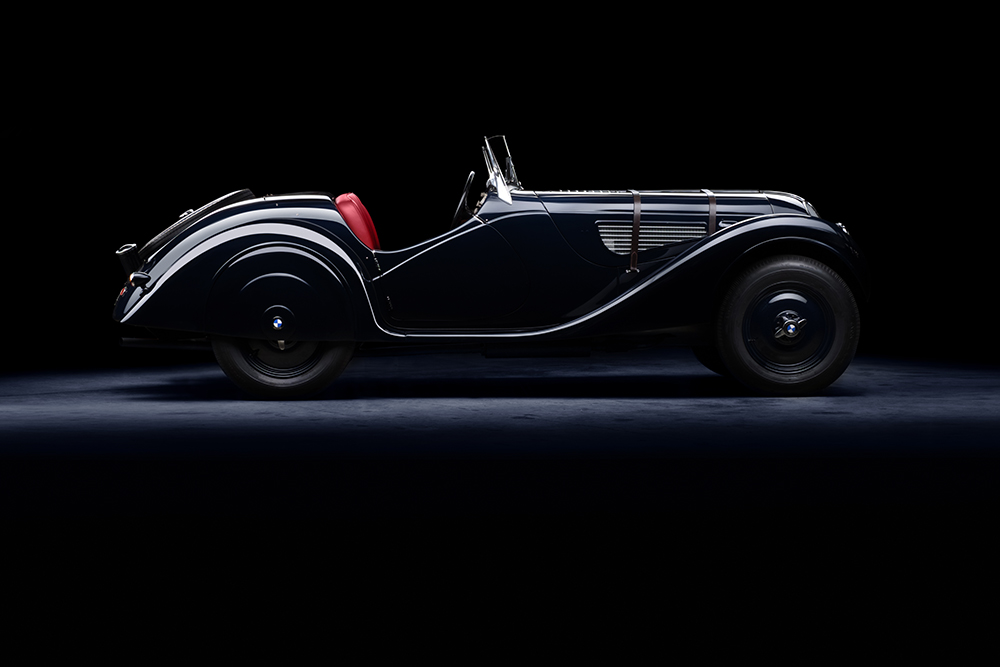 This rare car is one of the very few right hand drive models imported into England by A.F.N. Ltd of Isleworth. Its list of competition successes was without precedent in the pre-war years with both outright wins and fastest sports car in many races for the under 2 litre engine size. It is on record that a Frazer Nash BMW 328 completed more than 100 miles in the hour at Brooklands Race Track.

In spite of its high performance, the 328 will handle with docility on everyday roads and the comfortable suspension was a revelation when compared to the hard sprung sports cars of the day.

In 1999, the 328 BMW overcame competition from 24 iconic cars to be named “Car of the Century” by a worldwide panel of automotive journalists.

All of this was of such significance that even today, the basic kidney-shaped radiator grill is still reflected in the modern production cars.

GML 185 (named ‘Zoe’ by the owner) came into its current ownership in January 1950. She was supplied by Gilly Tyrer of Litherland Motors, Liverpool. Over the years, she has been on international tours, competed in speed hill climbs, taken part many times in the Motor Cycling Club’s three historic classic reliability trials (The Lands End Trial, Exeter Trial and Edinburgh Trial) and many events run by local motor clubs in the South West.

In that time, Zoe has been awarded around 17 plaques, cups and badges, and provided many years of enjoyment and excitement.

Since 1950, she has been driven over 70,000 miles and, it can with honesty be said, that her quick responsive engine, precise steering, comfortable ride and balance create a feeling of being “as one” with her.

Starting with the bare chassis, the full restoration has taken over two years to complete, and was carried out in a very sympathetic manner and as close to the original factory specifications as possible.

Today, Zoe is a stunning, rare and authentic example of this iconic marque.

In June 2017, Zoe won BEST IN SHOW at the City Concours held at the Honourable Artillery Company in London!