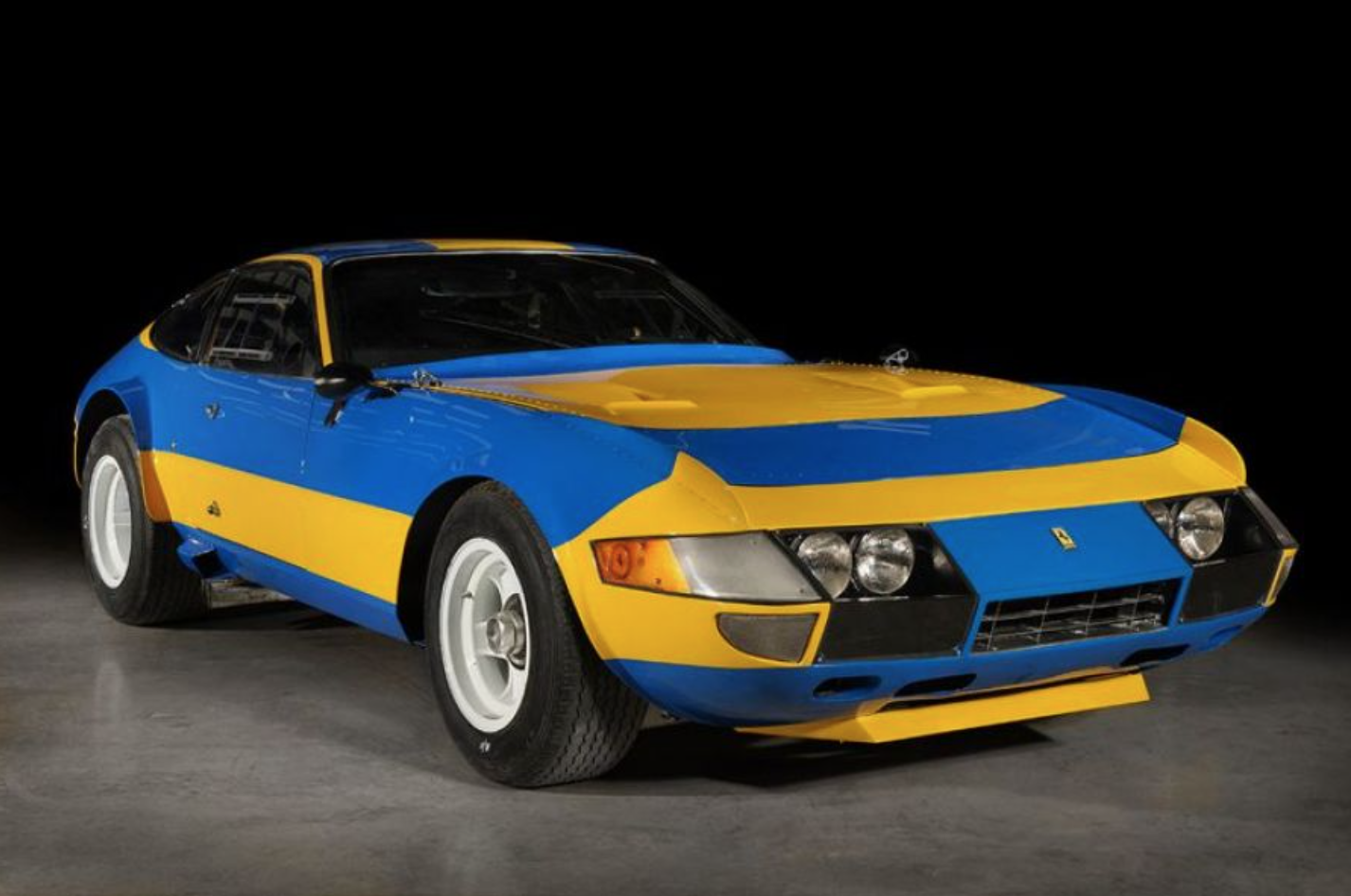 Ferrari made 1284 of their V12 365 GTB/4 Coupes as well as 122 Spiders.  This is one of the early cars from 1970, originally with a plexiglass headlight arrangement.  It was converted from a road car to Group IV Competizione specification in the 1970’s by Ulf Boman, a Ferrari Dealer from Sweden (hence the colour scheme – Flygvapnet is Swedish for “Air Force” – his main sponsor).  Ulf had a hair lip, and to hide this he grew a large red beard.  The Ferrari factory mechanics at Maranello nicknamed him “Barbarossa” – Italian for Red Beard, and it seems he was quite the character, once driving his newly delivered Brabham F3 car from the docks at Gothenburg through the streets straight to his workshop.

The car was extensively campaigned in sports-car races in Europe in the 1970’s, the 1980 Cognac rally, and then raced in Nassau in the early 1980’s where, after a minor crash, Ulf sold the car to a US owner, and the car remained in the USA with two owners racing at, for example, Lime Rock, Connecticut and Moroso Park, Florida until it was returned to Europe in 2011.

Race-prepped by Ian Gwynne from BGMSport ( www.bgmsport.com), the car ran at the 2011 Silverstone Classic, winning its class in the Italian Historic Car Cup race (according to the owner this was largely due to ace driver Mark Donaldson!). It also ran at the 2011 Classic Endurance Racing series (www.classicenduranceracing.com) finale at Paul Ricard in France.  The car also competed in the 2011 Eco Targa Florio in Sicily – all under the Scuderia Barbarossa banner, in honour of Ulf.

We received the Daytona for a winter body and trim restoration, involving a complete strip to bare metal, installation of a new aluminium door skin (the car had one steel door, one alloy!), fabrication of rear brake ducts, correct installation of a Monza-type fuel filler cap, and we also fitted a new aluminium bonnet with correct exposed rivets.  We then altered the profile of the front wings slightly to allow for full steering lock without fouling the Avon wet weather race tyres (higher profile than the Dunlop racing drys).  The car has been painted in the original Swedish colours prior to installation of the trim.