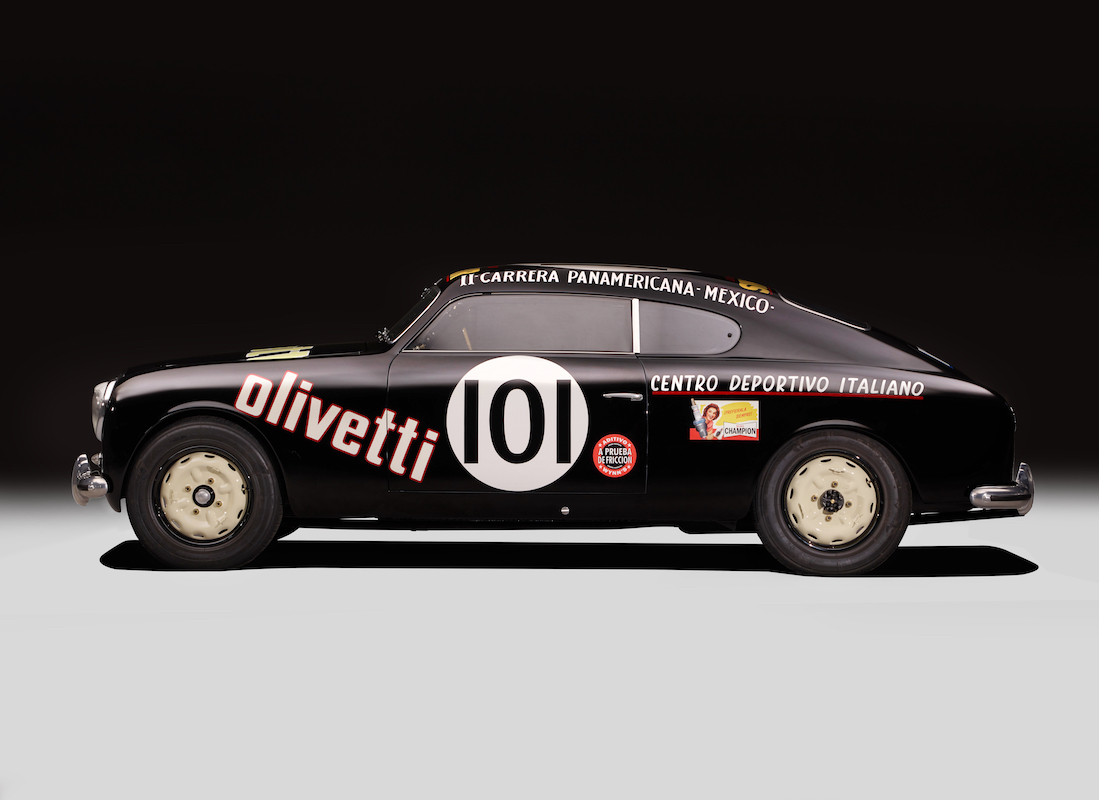 Thornley Kelham is privileged to have restored the most famous Aurelia, possibly the most famous Lancia –  the ex-Bracco Series 1 Aurelia B20GT chassis B20-1010. One of 490 first series cars ever built, it came second in the 1951 Mille Miglia a matter of days after leaving the factory. This was followed by a class win (by over a lap) at Le Mans that year, various Italian race wins including the Pescara, and in November of that year, entry into the second Carrera Panamericana. In all cases it was driven by Giovanni Bracco, a wealthy privateer with close connections to Gianni Lancia. Unfortunately it crashed out on the fourth day of the Panamericana, having been in a strong position. It was subsequently sold by Bracco to a Mexican architect, Peredo, who rebuilt the car and drove it in the ’52 race, finishing 9th in class.

Our search began when one of our clients wished to find an ex-competition car to restore and shortly afterwards, out of the blue came a call from Mark Donaldson, ace car finder. ‘Remember our search for a competition Aurelia ? Well I think I’ve found one’.

Mark had, months earlier, contacted (amongst others in his extensive network) an Italian friend about finding a competition Aurelia. And now he had come back to him – very excited. He explained both on the phone and in emotional emails, what he believed he had unearthed – the ’51 Mille Miglia car.  Found in a garage in the USA, the Italian was in the process of arranging to ship the car back to Italy, but via the UK. Although it would be in a bonded warehouse, we would be welcome to go and view the car once it arrived. The car had been bought by the Italian, and would be sold by him.

The car looked really cool and I have to admit to a serious ‘hairs-on-the-back-of-the-neck’ moment. Sitting low on Series 2 wheels and huge tyres with a strange hump back, peeling white paint and bits of rope apparently holding it together, it was definitely an early Aurelia – but was it the Aurelia? The wing line was right, and it had a very early dash with the wonderful (if faded) sunburst dials (no rev counter, but an additional temperature gauge set into the radio blanking plate). There was a section cut away above the windscreen on the driver’s side…

Not much floor left, rusty seat pans, door cards covered with green, then red, and finally grey materials of different kinds – as were the remains of the seat backs. Broken plexiglass side windows and a gold metallic plastic steering wheel.

Moving to the front of the car there were clearly filled-in drill holes in the front shroud and bonnet front which would correspond with bonnet straps as per early photos.

We opened the bonnet and apart from a modified rubber water pipe, the engine looked in time warp condition – correct dual throated Solex carbs (together with the floor gear change, pretty much the only performance upgrade from standard road spec.), dented but original – looking air box, and the usual Lancia parts in evidence. Engine number: B20 1009. Chassis number: B20*1010, both stamped into the bulkhead and on the tatty blue plate. We knew they were the numbers we needed to see, but could they be faked? One concern was the strange sea green metallic paint that seemed to coat the whole engine bay despite the apparent originality of the engine itself.

Mark pointed out evidence of accident damage at the front of the car which did correspond with photos we had already seen of the car on the Panamericana post-accident. Although the car seemed to have been completely stripped at some point and painted in ‘Dulux’ white paint, we eventually found traces of black paint (Mille Miglia colour) in the rear window recesses, and then red overspray in the door  jambs which fits with the story of Lurani insisting on a red finish for Le Mans.

The cut away above the driver’s head did suggest a third windscreen wiper, and an unusual fitting on the passenger footwell reminded me of a previous conversation with Nigel Trow about a manual damper setting system on certain competition cars. Up on the ramps much of the car looked standard and correct, if shot, and again a number of additional lines linked in to the manual damper adjustment idea.

The rear of the car was puzzling. Our previous research had suggested that the car was lowered in the weeks before the South American event, probably in Turin, but period photos showed a sloping rear, which although lower, was the same profile as a standard car. The car in front of us was lowered sure enough, but had been extensively re-profiled to give a beetle-like appearance; very hump-backed and with bulging sides. The rear screen looked wrong, and the boot lid was not an Aurelia item. Likewise the boot floor was incorrect with a non-Aurelia fuel tank, and the whole interior was covered with a very thick coating of underseal.

Paperwork with the car was scant, in a separate box was a very early Aurelia bumper cut in half, a buff Lancia handbook, and numerous small envelopes with Lancia part numbers written on. Also a pencil scribble on an envelope which, if you half –closed both eyes could conceivably read ‘Bracco’….

Our Italian connection had done some further digging and was now convinced of the car’s provenance, but Mark and I had to be sure as sure as we could.

Over the next couple of days we did turn up some more information, and the car did seem legitimate and our client went ahead and bought it.

We decided very quickly that the key was to find out as much as possible. We also knew there would be no shortage of doubters, so we put out a few feelers to senior Lancisti to try and find more on the car. We also invited a handful of the Aurelia ‘brethren’ to come and see the car. Without exception, the reaction was  positive and even joyful.

Over the following weeks we took many measurements and have had a huge slice of help from our old friend Ron Francis, who knows more about Aurelias than I ever will. He has a very complete Series 1 to which he has given us unlimited access. We have used this in several ways. We have undertaken a professional photo shoot, comparing the two cars from all angles, which amongst other things, confirmed our suspicion that the roof has been messed around with post Panamericana – the roof pillars slope inwards much more sharply than in period photos. We also took a fibre glass mould from the offside rear quarter of the standard car for future use. Finally, we are utilising new technology in a really exciting and sympathetic way which will be covered in a future update.

There are already many people to thank for their support, information, enthusiasm and advice. In no particular order they include Ron Francis, Nigel Trow, Paul Mayo, Chris Gawne, Anthony MacLean, Ade Rudler, Ed Godschalk and John Baker.

The brief from our client was clear and misleadingly simple – the car must be restored to look exactly as it did when it rolled up to the start line in Mexico in 1951. And, quite rightly, we must retain as much of the original car as possible. We looked forward to the challenge of restoring this real star in Lancia’s dazzling firmament.

*If you have to ask what Aureliaitis is, you will never understand.

Our next stroke of luck was making contact with Giovanni De Virgilio. Based in Rome, one of the two sons of Francesco De Virgilio, creator of the Aurelia engine, and a close friend of Bracco. Giovanni is full of knowledge, contacts and enthusiasm for this project, and has become a friend over the past year or so. He is also patient – answering a stream of emails asking for information or opinion. Already we owe him a great deal.

It was clear that the rear endif the car was an Americanisation – a late 1950s/early’60s ‘lead sled’. The rear screen, boot and part of the rear wings of an unknown car had been skilfully grafted onto the car. As the photos show, we had to remove all of this, and, using photos, fibreglass, and the wizardry of 3D Engineers‘  scanning, we eventually recreated the rear end profile to the exact profile of the original car. A challenge for Darren and the metalwork team…

We had lengthy discussions with the owner about the general approach to this restoration. He took the brave decision that the car should be restored with the emphasis on preservation rather than replacement. This means that the body, which was in poor shape, has only had the minimum original panel work removed where corrosion was present. Rather than replacing whole panels or sections, we have grafted in repair panels throughout the car.

Once we felt that the body repairs were complete, we called in a panel of Lancia experts to take a look – ultimately they would decide if the car was right. To our relief, it passed with flying colours. And so the car was prepared for paint. Having read the history of the car, we decided,together with the owner, to emulate the history of the paintwork. This meant that the car was given an initial coat of black as per factory original, then painted red, as per the Le Mans specification, and then went back to black, as per the Carrera Panamericana!

Separately Wayne scoured the planet (literally) for the host of original parts needed to make the car as authentic as possible. Amongst other things bumpers (thanks George), lamps, handles, wheels and a host of fittings for the interior and engine bay have been located with the help of friends and suppliers. Many of these parts are hens’ teeth rare, but the Bracco story is infectious.

Trimwork was entrusted to the legendary Rob O’Rourke, and a mighty task it was. We pored over original photos together, looking for clues as to the interior spec. for the Mexico race. Clearly the front seats are not factory original, nor were they covered in Lancia cloth, but ‘Rorky’ has done an amazing job of recreating the interior.

The signwriting was meticulously researched and completed by Mark Amis to as near to the original as possible, using photos and logos of the period as reference.

The completed car looks absolutely stunning and made its post-restoration debut at Pebble Beach in California in 2015 in front of a very admiring crowd.