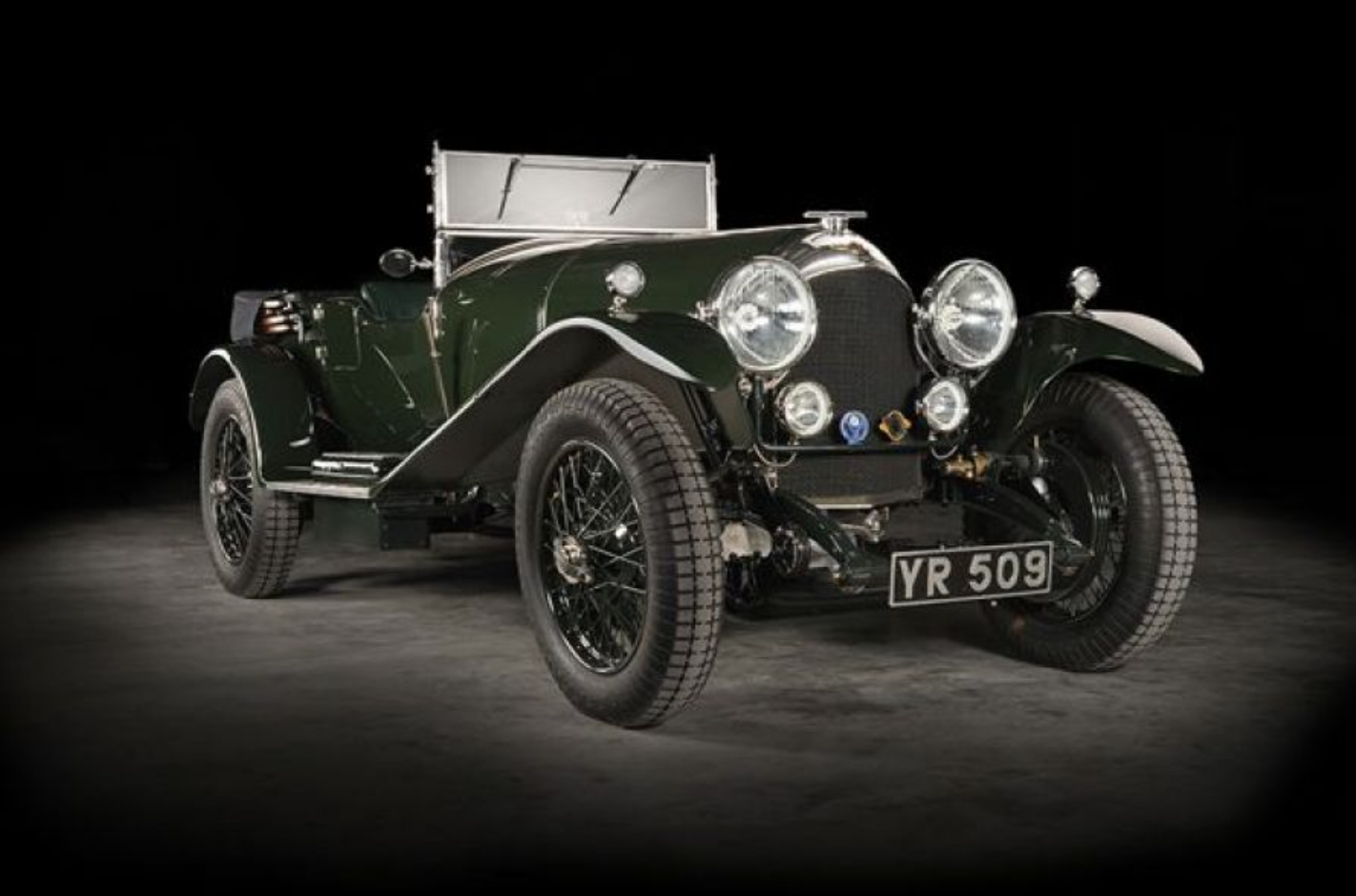 The first Bentley was made in 1919 by Walter Owen Bentley and showcased at the London Motor Show that same year. However, the cars did not go into production until two years later in 1921. Three variants of the original 3 Litre car were made; Blue Label (standard chassis length of 10’ 10”), Red Label Speed (shorter chassis of 9’ 9.5” and higher compression engine) and a very limited number of Green Label or Supersports cars.  The 3 Litre Bentley won the 24 Hours of Le Mans race in 1924 and again, in 1927.

One of only 513 Red Label Three-Litre Speed cars built at WO Bentley’s Cricklewood premises between 1923 and 1929, this rare car still retains all of the original mechanical components and, importantly, the original Vanden Plas 4 seat open tourer body.  Delivered on the shorter than standard 9′ 9.5″ “Speed” chassis it was supplied with the higher compression engine and twin “sloper” SU carburettors, allowing progress at speeds of over 80 mph….quite something for the 1920’s, and still entertaining today.

Chassis DE1220 had been previously restored in the UK in the mid fifties to original specification after 30 years of hard service to such a high quality that it won the Bentley Drivers Club (BDC) Concours at Kensington Gardens in 1957.  It was a well known car at that time in BDC circles (www.bdcl.org) and was driven at Le Mans in 1957 by Mike Hawthorn in a parade of older cars prior to the main 24 Hour Le Mans endurance race which in the end was won by Ron Flockhart and Ivor Bueb in an Ecurie Ecosse Jaguar D-Type, with Mike retiring with mechanical failure in a Ferrari.  DE1220 was also driven at Oulton Park race circuit by SCH “Sammy” Davis, legendary motoring journalist, one of the Bentley Boys and winner of the Le Mans 24 Hour race in 1927 in another 3 Litre Bentley.  Over the intervening years the car had been maintained well but never fully restored and, after 30 years in the USA (where it won “Best Vintage Bentley” at the RROC 1973 concours) and a short time in France, was repatriated to the UK. Our job was to take on and complete the second much-needed restoration in the life of this octogenarian.

As with any major restoration project, the first task is to strip the car down to its component parts and assess for wear and damage. Once the Bentley was in our workshops we stripped the car down completely. The wings, bonnets and fuel tank were dismantled and all paint removed from them by chemical cleaning. The fabric was then removed from the body shell and doors so that we could assess the state of the aluminium skins underneath.

It was clear that it had been many years since the last full restoration, and the frame needed repair. In conjunction with the owner our aim was to retain as much original material as possible whilst replacing damaged areas with new wood and metal for maximum strength and durability. We agreed that the best option was to have four new wings and a new tub fabricated from aluminium, and so the old skins were carefully removed from the frame.

The ash frame was now revealed in full, and had suffered shrinkage and deterioration over the years. It also revealed its long history, including burn marks from the welding of the old tub! After discussions with our ash framer we agreed that we should save as much of the original frame as possible, but ensure that the repairs improved the integrity of the frame and removed all existing problems.

All the metal brackets were first removed from the existing frame then the frame was stripped of all paint and nails, and any damaged sections of wood were removed. The frame was then carefully re-built, adding in new wood sections where necessary, without the use of any glue. We retained as much of the original frame as possible and new wood was carefully jointed into the old sound wood. The existing aluminium bracing was repaired, all fittings and fixtures cleaned, repainted and refitted. The frame was then offered up to the refurbished chassis, enabling us to ensure that the profile of the base corresponded to the fittings on the chassis. The whole frame was then treated with wood preservative and painted black.

Having a strong frame allowed us to wheel and roll out the various panels needed to restore the tub. These were pinned to the frame in the traditional manner, having been primed on their inside surfaces. New door skins were also fabricated.

Internally we replaced the floor pan under the rear seat squab with a new section that provided additional storage. . This was repeated in the rear footwells. Complete new wooden floorboards were made up for the front, to incorporate a concealed safe area.

We then carried out a dry fit of the car panels and locks to check for any gaps and to ensure the correct fit and finish.

A new long distance fuel tank was also fabricated from scratch, as requested by the owner. This involved taking measurements both from the original tank and the area to the rear of the car – particularly around the differential. The tank was then fabricated from zinc-coated steel, internal baffles were fabricated, a brass collar made for the sender unit and the tank soldered and riveted as per the original. Once complete, the new tank was pressure tested for leaks, and painted body colour.

Having examined the engine with the owner we agreed to remove and detail it; a rebuild being unnecessary. Two engine side plates and one end plate were removed and new gaskets fabricated; we cleaned the fixing screws and replaced them using sealer on the threads. The starter switch was removed and rebuilt and we fitted a hidden modern electric fuel pump to the rear of the car, whilst retaining the existing original Autovac set up. A Dynator was fitted to replace the dynamo, in a housing made from aluminium billet to retain the original look. All the old wiring in the car was removed and we made a new wiring loom in modern materials with period correct outer coverings.

We repacked the wheel bearings which were in very good condition, and the rest of the front axle assembly was then refitted back into the refurbished chassis. We then refurbished and refitted all the brake actuation components, both at the axle ends and the cross-shaft, and then fitted them to the chassis. The front and rear springs were measured for new leather gaiters, which have been fabricated to an original pattern and fitted.

Our in-house machine shop made any components that had to be replaced. The engine was completely cleaned, and we then began the assembly of the chassis. The entire car had previously been put together with metric set bolts and not the correct BSF bolts. We therefore replaced each bolt with the correct type, which we machined to the correct length and to remove to the manufacturer’s stampings off the heads.

A popular and accepted upgrade is to replace the steering box internals with those of 41/2 litre specification. The components comprised a case-hardened and ground worm; bronze wheel and steel shaft, bearing housing, aluminium distance piece and steel washer. The steering box is machined internally to accept these components and the new unit assembled. As a result we expect the steering on the car to be somewhat lighter.

A complete new set of gears has been made up for the A series gearbox. Standard A ratios have been retained, with an upgrade to a six-splined output shaft and corresponding gears. This eliminates the weakness inherent in the twin key output shaft system.

We discovered a major crack in the front offside back plate, and so a new plate was ordered and polished to match the existing. Five new wire wheels were purchased and painted Brewster green to match the body, and fitted with five new Blockley Tyres.

Fifties photos proved that the car was fitted with expensive Zeiss lamps which had subsequently been removed.  We therefore ordered a complete new set of Zeiss lamps – (head, side and auxiliary). These are wonderful items that were fabricated by The Vintage Headlamp Company. The headlamps required an improved mounting system and we therefore designed and cast more suitable brass pillars which have been machined and fitted to the chassis.

The chassis has been completely stripped down to ensure a thorough job could be made of repainting. We therefore had the chassis blasted, after which it was immediately primed and painted in two-pack semi gloss Brewster green paint.

We also stripped and cleaned the aluminium bulkhead, hand polishing the engine side and painting the cockpit side matt black.

All the new aluminium bodywork panels were de-greased and re-masked the car ready for painting. Etch primer and primer coats were applied, followed by six coats of cellulose paint which were flatted to allow the paint to breathe. Everything was left to cure for two weeks, after which a further six coats of Brewster Green nitrocellulose were applied, again flatted and left for a fortnight, and then finally – laboriously – hand polished to a finish – a finish only achievable with cellulose.

In addition to the new metalwork inside the car, we have made a new dashboard from mahogany and applied a suitable darker stain. We then stained the hood frame to match. All the gauges have been dismantled and checked, and the water temperature gauge sent off for specialist refurbishment.

REASSEMBLE, TESTING AND RUNNING IN

The car is now fully restored and back on the road.