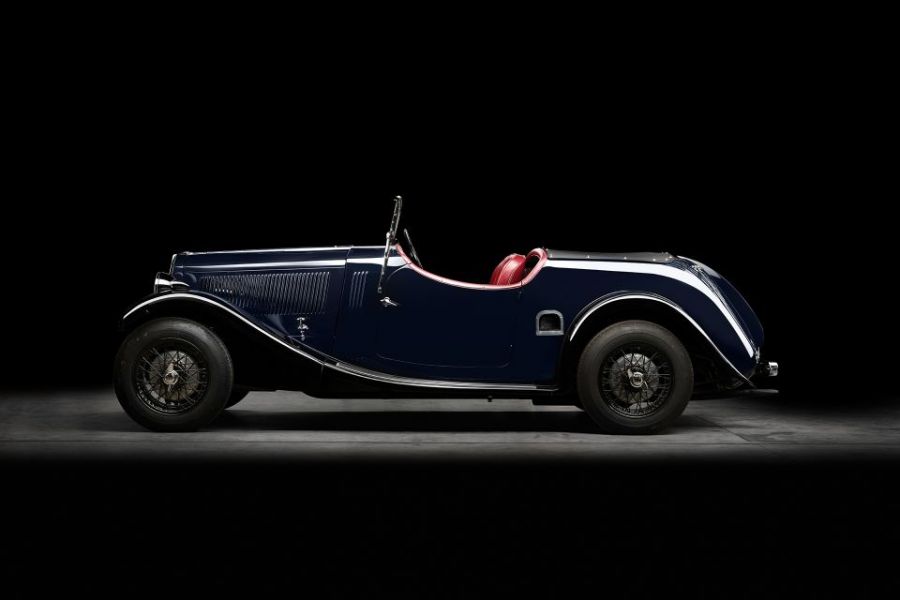 In 1932 Freddie March of Goodwood, 9th Duke of Richmond and Gordon, designed the world’s first production car featuring what is now known as Art Deco ‘aero’ styling. Two years later, he incorporated this trademark aerodynamic spirit into the Lancia, adorning its curvaceous boot lid with a cutting vertical tail fin, and extending its sweeping rear fenders well beyond the vehicle’s coachwork into the slipstream.

Richmond’s best-known design was the March Special Tourer, which was introduced in 1934 for the Lancia Augusta chassis. At the time, the Augusta was one of the world’s most advanced automobiles, and its V-4 engine and independent front suspension, comprising concentric springs, and oil-filled shock absorbers represented the height of modern motoring. It was an obvious basis for March’s equally advanced design, which represented one of the first reaches towards streamlining by a British stylist. The rear of the body was gracefully rounded and curved, with a tonneau covering the rear seat while it was unoccupied. A large dorsal fin was also mounted in the rear deck lid, to which air was guided by long, flowing fenders. To emphasize smoothness and aerodynamics, the top was hidden from view when folded, marking one of the first uses of a disappearing soft-top for a British open car.

The March Special attracted a great deal of attention in period press. In the June 5, 1934, issue of ‘The Motor,’ Tenon described the model as “a car of unusual interest…designed with a view to performance and efficiency, as well as appearance; a characteristic of March coachwork.” He returned to the subject on December 18, 1934, describing the car as “the result of an attempt to produce a really practical design for the enthusiastic owner. Lord March’s own racing experience has been drawn upon in evolving a thoroughly efficient model.”

This March-bodied Lancia was already rare in its day and this example is one of only a handful known to have survived. Thornley Kelham have been asked to carry out a complete and thorough restoration of this rare and wonderful car. It arrived in a shocking state, literally falling apart. It took a new owner with the foresight, imagination and sheer will and determination to rescue this rare beauty, and see the potential to bring it back to life.

Following a 5 years of research and painstaking restoration to concours standard, this remarkable and rare car is now complete. It was exhibited at London Concours in August 2020, and subsequently driven by Freddie March’s descendent, Lord March, at Goodwood in September 2020, a historic return to where the adventure all began.