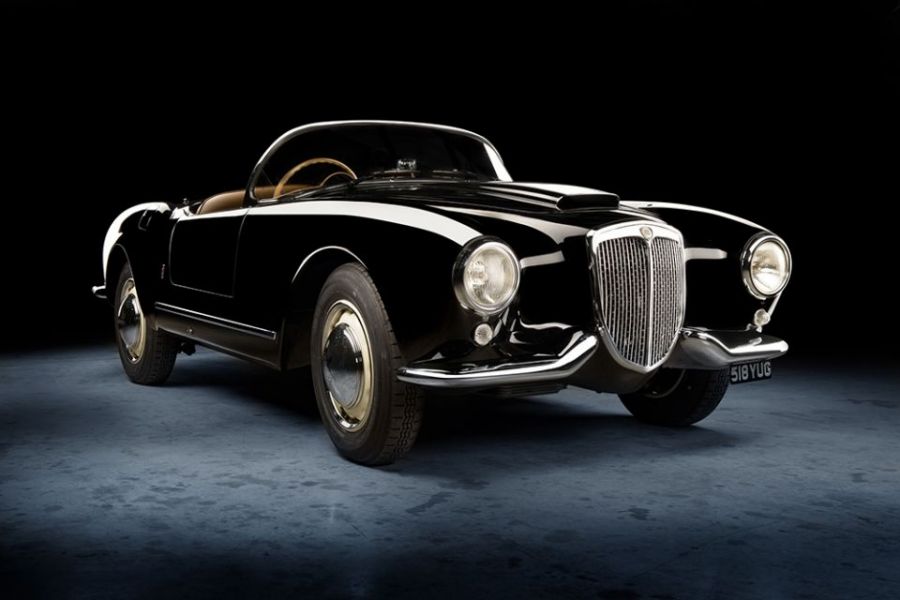 Surely one of Pininfarina’s most beautiful designs, the Lancia Aurelia B24 Spider made its début at the 1955 Brussels Motor Show. Battista ‘Pinin’ Farina, who had a long and close relationship with Lancia, both designed and bodied the two-seater sportscar. In some ways a perfect example of form over function, having a poor–fitting hood and side screens and no external handles, the Spider nevertheless is today deemed much more desirable than its altogether more practical successor, the B24 Convertibile. And the detail is exquisite – the curved panoramic windscreen – which has exactly the same rake as the steering wheel, the simple painted dash with classic Veglia dials, the understated trim, combined with Lancia’s Fourth Series Aurelia B20GT shortened platform to create a simply wonderful driving car.

In engineering terms the B24 Spider is pure Lancia – sophisticated four-speed transaxle, responsive worm and sector steering, four wheel hydraulic drum brakes (mounted inboard at the rear) and all-round independent suspension (sliding-pillar front/semi trailing arm rear). Allied to Lancia’s obsession with unsprung mass and weight distribution, the Spider gives a truly balanced, responsive drive. The Aurelia’s all-alloy engine had by now evolved to 2451 cc, utilized shell bearings and was fed by a single twin choke Weber 40DCZ5 carburettor. Developing 118 bhp and 127 lb ft of torque, in a car weighing a mere 1,050kg, it was capable of 185km/h in standard tune. A handful were competition prepared; Bernando Ferrari contesting the 1956 Mille Miglia and ‘Ermete’ the 1956 Coppa d’Oro delle Dolomiti.  All B24 cars had a floor gear change.

Built in very limited numbers, the B24 Spider was produced for just one year (1955), and a mere 240 examples rolled off the production line, of which 59 were right-hand drive (LHD counterparts were given B24S chassis numbers). The Lancia Aurelia B24 Spider has long been a motoring icon, and today is sought after by the world’s top collectors.

This particular car, the ninth example built,  was produced in April/May 1955, and is one of only two RHD black cars. It spent its life in Italy until 2011, having just 3 Italian owners. The first owner was Dott. Cirino Rao of Sicily, who is still active in the Lancia club today; he eventually sold the car to Sig. Veniero Molari of Turin.

The third owner, who purchased the car in 1979 – for 11 million lire – already owned B24-1007 and was restoring it when he was offered this car. Astonishingly 1007 was fitted with the original engine from B24*1009! So today ‘our’ car is a matching numbers example which has never previously been apart, and has a wonderfully patinated original interior.The car was purchased by its current owner in 2011.

The car had never been apart, never restored, but had been mechanically maintained, and had had minor bodywork repairs as necessary. We have now sourced an original – and extremely rare – Pininfarina hard top which can only enhance the desirability of one of the most beautiful cars ever built.

Having been instructed to undertake a full restoration (with the emphasis on preservation), the sliding pillar front suspension, transaxle, rear axle and engine bay ancillaries have all been rebuilt to as new specification. Once stripped, the bodywork was found to be surprisingly corrosion-free but, judging by the number of dents and minor repairs, the car had had an adventurous life.

The car has now been completely restored to concours standard and is a stunning example of this highly desirable Lancia model. It was entered into the 2015 Salon Prive’ Concours d’Elegance at Blenheim Palace where it won a concours prize in the ‘Wind In Your Hair’ category.

For further details of this car, please contact Simon at simon@thornleykelham.com