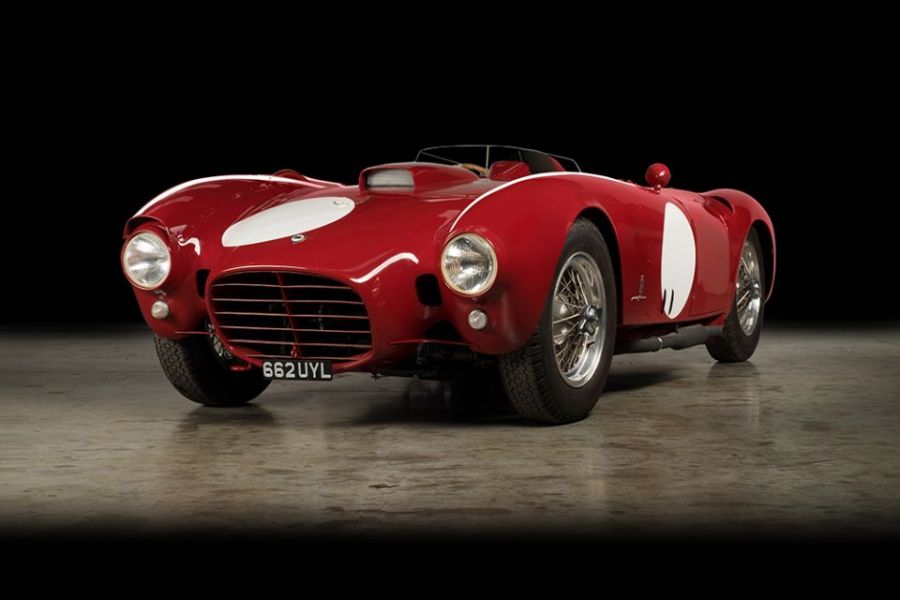 Inspired by the giant-killing success of Bracco and Maglioli coming 2nd overall in the 1951 Mille Miglia, in their almost-standard Series 1 Aurelia B20GT (recently completely restored by Thornley Kelham); followed by Aurelias coming third, fifth, sixth and eighth overall in the 1952 Mille Miglia, and the outright win in the 1952 Targa Florio, Gianni Lancia moved rapidly towards building the world-beating sports racing and Grand Prix cars which would become the Lancia D24 and D50 respectively.   The 2 litre Aurelia, with only 80 horse power and a top speed of 160 kph, averaged an incredible 110 kph in the 1951 Mille Miglia –Villarosa’s winning 4.1 litre Ferrari managed 115kph – so what could Lancia accomplish with purpose-built racing cars designed on a clean sheet of paper, embodying the traditional Lancia principles of innovative engineering, lightness, excellent braking and perfectly balanced handling?

In 1952 work started on the D20 sports racer, which was totally different in design and concept from rivals produced by Alfa Romeo, Ferrari and Maserati.  The engine was a lightweight all-aluminium, 4 cam, twin plug unit mounted well back in the chassis, and delivering 217 bhp and excellent torque.  The front suspension was also completely new, based round a transverse leaf spring and designed to be light and positive while rugged enough to deal with the poor road surfaces of the day.  The front brakes were huge inboard drums, designed to reduce unsprung weight and give the greatest possible friction area – a feature later copied by Mercedes Benz in their 300SLR.  The rear suspension and brakes, again by inboard drums, were similar to the Aurelia’s, mounted to a transaxle to give perfect 50/50 balance.  The car weighed only 850 kilos and soon proved the quality of its innovative design with third, seventh and eighth places overall in the Mille Miglia and an outright win for Maglioli in the Targa Florio.

Development work continued apace at Lancia throughout 1953 and early 1954.  Lancia once again used an almost clean sheet of paper to incorporate the lessons learned from the D20 and the comments of their drivers.  The D24 had open spider bodywork designed by Pininfarina of a purposeful beauty which he probably never surpassed.  The engine capacity was increased to 3.3 litres, although a highly developed 2.5 litre engine was also tried with a possible dual role for the D50 Grand Prix car then also under development.  The rear suspension was redesigned with leaf springs and a de Dion tube.  Inboard drum brakes were retained all round and the front suspension was unchanged.  The clutch and gearbox were also completely redesigned.  The D24 was distinguished by two air intakes on the right front wing bringing cold air to the redesigned lubrication system.  The results of this exotic package reflected all the development work. In November 1953 the D24 achieved a one (Fangio), two (Taruffi), three (Castellotti) outright win in the gruelling long distance Carrera PanAmericana in Mexico.  Ascari then won the 1954 Mille Miglia at an average speed of 139 kph.  This was followed by an outright win in the Targa Florio for Taruffi.

So in 1953/4 Lancia won outright the three most famous road races in the world, defeating challenges by Alfa Romeo, Ferrari and Maserati. Efforts were  then concentrated on the revolutionary D50 Grand Prix car; and the last major outing of the D24 was in September 1954 at the RAC Tourist Trophy where it  achieved fastest lap, but had to be content with fourth place overall.

Sadly, clean sheets of paper and excellence in design regardless of cost proved too great a strain for Lancia’s fragile finances.  The D50, the only Grand Prix car able to match the performance of the Mercedes W196 in 1955 (a story well told by Chris Nixon in his book “Rivals”) achieved some success including pole positions at Monaco and Spa, but financial problems and the death of Ascari (while testing a Ferrari) forced the closure of the Lancia racing department, and the hand over of the cars free of charge to Ferrari – whose own Grand Prix cars in 1954 and 1955 were hopelessly uncompetitive.

Fangio won the World Championship for Maserati in 1956, following up again in 1957 for Ferrari- in the Lancia-Ferrari – much modified, but in testing proving no faster than the original D50.  There is wonderful black and white footage of Fangio demonstrating a D50 on the Monaco circuit – not to be missed on YouTube.

All but two of the D24s were broken up on the orders of the Lancia board of directors, although some of the engines survived and found their way into private hands in Italy.  The destruction was witnessed by a young Guido Rosani whose father was a director of Lancia.

Many years later in the 1980s, and with the help of Luciano Basso in Turin and the unofficial support of the Lancia Museum, Guido Rosani embarked on the ambitious project of recreating four D24s, built exactly to the original Lancia drawings and using original Lancia 4 cam racing engines. Basso and Rosani simultaneously oversaw the restoration of one of the two surviving D24s (which had been given by Gianni Lancia to Eva Peron) for Count Vittorio Zanon.  The restoration involved a completely new body, built alongside the four recreations.  The Eva Peron car later received a new block and front suspension – the chassis having been rebuilt following Bonetto’s accident in Mexico in 1953.  The only other surviving original D24 is in a museum in Europe.

The four recreations have been in long term private ownership in the USA and Europe.  One was successfully campaigned on the Carrera PanAmericana (6 appearances, 2 class wins, always in the first 20 cars overall and once in the first 10 overall), The Goodwood Festival of Speed (class winner), The Goodwood Revival (fastest lap with Jochen Mass and second overall), the Targa Florio, the Targa Tasmania and numerous other events.

The car featured is virtually unused and in as new condition; it features the sole surviving 2.5 litre, 4 cam, twin plug engine developed by Lancia for the D50 and D24.  It is equipped with both twin aero screens and a metal tonneau cover over the passenger seat carrying a wrap round single windshield, as used in period.  It has been carefully checked over and work done as necessary by Jim Stokes Workshops – who also rebuilt the mechanical parts of the D50 Grand Prix cars, and looked after the widely campaigned D24 referred to above..  With three 46 DCF twin choke Weber carburettors Lancia achieved 235 bhp at 7,200 rpm – a specific output per litre which would not be achieved by Ferrari until the late 1950s.

The car is docile to drive with a wide power and torque range and shows all of the legendary Lancia handling balance.  It is eligible for most major events. No more D24 recreations will ever be made – there are no remaining D series engines and the cost of building the recreations today would be prohibitive; most of the artisans in Turin who worked on the recreations with skills learned in the 1950s have either retired or died – the four recreations are a lasting tribute to their talents and dedication.

This wonderful car is currently being maintained by the team at Thornley Kelham.